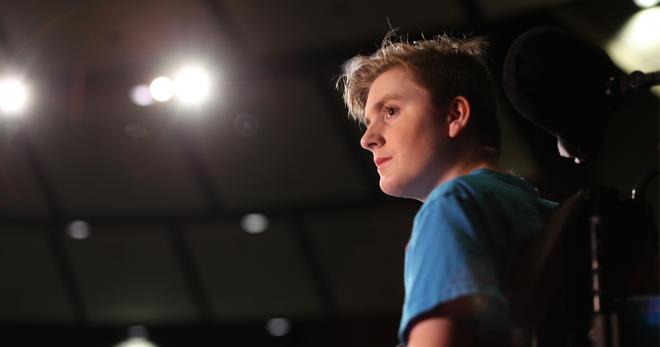 Jake Marrazzo first caught the acting bug in the seventh grade. In a short film for a school project, he played a character who panicked as he had his fortune read. “I thought about how my character would deliver those lines and how out of breath and panicked he should be,” says Jake. “That was the first time I thought, ‘Wow this is really fun. I should do this more often.’”

About a year before Jake found his passion for acting, he lost his ability to walk. Jake was diagnosed with Duchenne muscular dystrophy, or DMD, a rare genetic disease at age 8. The condition causes the body’s muscles to weaken and waste away over time. By age 12, Jake was falling often and needed a wheelchair to get around.

But Jake, now 17, is a lesson in limitless possibilities. In high school, he found his home on the stage. Whether he’s playing the Genie in “Aladdin,” or Smee, Captain Hook’s sidekick, in “Peter Pan,” Jake’s a natural at transforming himself into characters. Audiences don’t see a kid in a wheelchair, they see a passionate actor, loving his craft.

Jake who lives in Hudson, Massachusetts, with his mom and dad, hopes that he can encourage other kids with his condition to pursue their dreams. His 4-year-old nephew Tyler also has DMD. “I hope to inspire the younger kids with Duchenne, so that they will see me and be like, ‘Wow, he's doing theater and stuff like that. Gee, maybe I could do that too.’”

Most children are diagnosed between 3 and 6 years old. As their muscles weaken over time, they develop problems walking and breathing and can have life-threatening complications. Many with DMD need to use a wheelchair by 13.

Jake had a healthy early childhood, according to his parents, but he was always a little slower than his peers, earning him the nickname “turtle.” Around 8 years old, he started to show some typical early DMD symptoms: He walked on the balls of his feet with his stomach sticking out. He needed to use his hands to lift his body off the floor. And he fell constantly.

After seeing a variety of doctors, a genetic specialist eventually diagnosed Jake. His parents were in total shock. His mom, Sheryl, was unaware that she carried the mutation; none of her brothers or family members had the condition. Looking back, Sheryl says she made a mistake by searching the condition on the internet that day and reading the grim statistics that most patients only survive into their 20s. “We went through a grieving process,” Sheryl says. “My husband and I cried together that first night. But in a couple of weeks, we realized by doing that we’re not helping ourselves and we’re not helping Jake.”

There’s currently no cure for DMD, and limited treatment options. Jake has bi-annual check-ups of his heart and lung function at a nearby Duchenne clinic and undergoes various forms of physical therapy. Besides getting around in his wheelchair, he has a variety of tools to make his life easier: an elevator at home and a “stander,” a device that helps him stand up at school and stretch his legs. 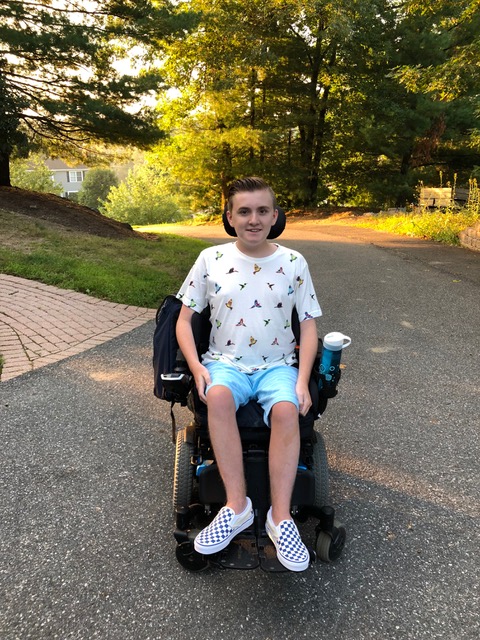 Despite his serious diagnosis, Jake and his parents don’t allow it to define their lives. “I know it’s going to sound crazy,” says Sheryl. “But sometimes we feel like we were given a gift to live for today.” Connecting with other DMD families has given them hope as well. They met other people with DMD, who have children—they even met a man with DMD who had grandchildren.

Jake’s parents encouraged him to get a part-time job, and to do typical things that teenagers do.  He works as a host at a popular local restaurant, greeting customers and answering phone calls. “I take that job very seriously,” says Jake. “I really love interacting with people that come to have some good food.”

His family has also made a commitment to helping support other families with DMD. They started 4 Jake’s Sake, a charity to help families fund equipment to make their homes and lives more accessible, such as ramps and wheel-chair accessible vehicles. “We are very blessed. Jake doesn't really lack for anything,” says Sheryl. “But there's a lot of other families that do not have support. When we started 4 Jake's Sake, we realized helping others has the positive effect of making you feel better about yourself.”

Jake, now a junior in high school, looks forward to going to college in the future to study screen writing. He says he stays strong for Tyler. And since Tyler was diagnosed at a much younger age, the family is hopeful his condition can be managed earlier. “He's so young that he might not be in a wheelchair,” says Jake. “He's started getting treatment when he was only 3 years old.  He's a little crazy one too, Tyler. Oh, I love him.”

How to Keep Your Kids Active and Healthy 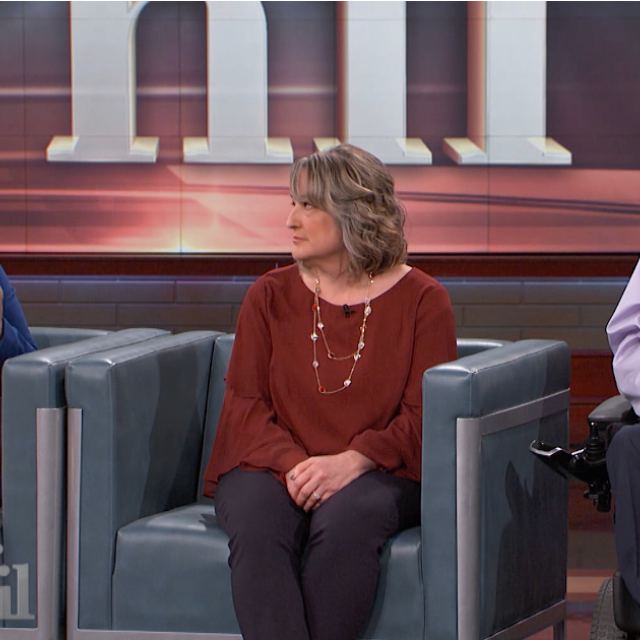