Measles on the Rise 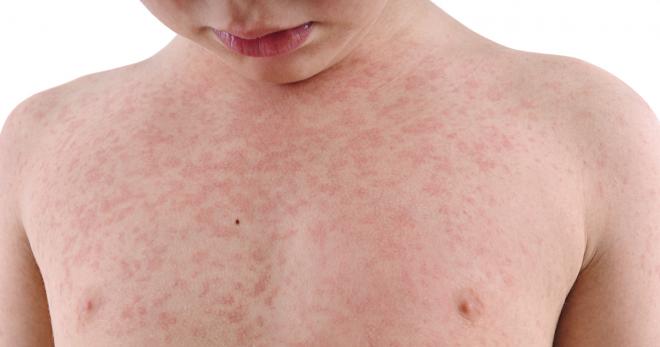 Before the measles vaccine was invented, nearly all children got measles by the time they were 15 years of age. An estimated 3 to 4 million people in the United States were infected each year. An average of 450 people died each year from measles—most of them children. Since the vaccine became available in 1963, there had been more than a 99% decline in the number of measles cases in the US. In fact, in 2000, measles was declared eliminated from the US. So why are we hearing about a measles outbreak now, in 2019?

More than 1000 individual cases of measles were confirmed in 28 states in the US from January to June 2019. According to the Centers for Disease Control and Prevention (CDC), this is the greatest number of cases reported in the country since measles was considered eliminated, and most of these cases were among people who were not vaccinated against the measles. 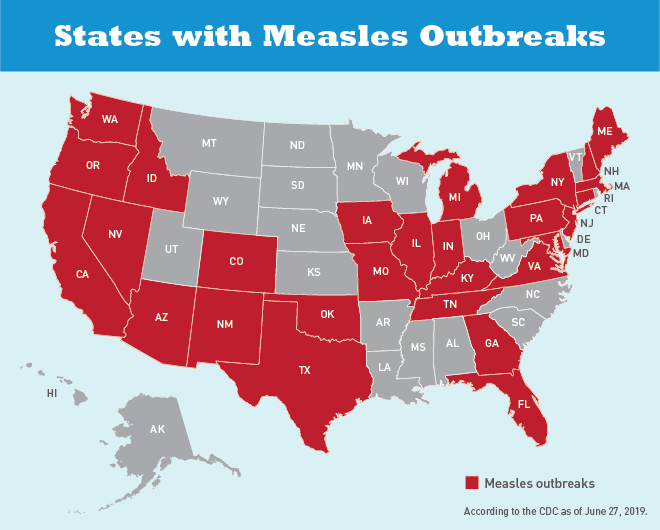 How did this outbreak happen?

Because measles is still common in some parts of the world, it can be brought into the US by unvaccinated American travelers or foreign visitors who were infected with the virus while living in or visiting another country. The disease can also spread in a community where groups of people have not been vaccinated—this can lead to an outbreak.

It’s important to note that while measles was declared eliminated in the US, it was not eradicated. With measles, elimination means that there is an absence of continuous measles transmission for 12 months or more in a specific geographic area, such as in the US. Eradication means that a disease has been eliminated from every country in the world. Measles was never declared eradicated.

Measles is one of the most highly contagious infections there is, spreading to others through the air via breathing, coughing, or sneezing, or by touching infected objects, such as door knobs. Up to 9 out of 10 people not vaccinated with the measles vaccine who come into close contact with someone with measles will contract the disease. Additionally, measles can remain infectious in the air for up to two hours.

The fact that measles is so contagious is a special problem because there is no direct, effective treatment for it. Measles is a virus, not a bacterial infection. This is important to understand because that means that measles cannot be treated with antibiotics.

What are the symptoms of measles?

Measles usually begins with general symptoms, including cough, runny nose, red watery eyes, and fever. The telltale symptom of measles is a rash that spreads from the head to the neck and then the rest of the body. It usually appears 3 to 5 days after the first symptoms.

It generally takes about 7 to 14 days after being exposed to someone who has measles before the first symptoms appear.

Are the measles serious?

Contrary to what some people may think, measles can be very serious, especially in children younger than 5 years old. In fact:

How can I protect myself and my loved ones from the measles?

According to the CDC, the best protection against measles continues to be vaccination. The measles vaccine is one component of a combination vaccine known as MMR, or the measles, mumps, and rubella vaccine. The CDC recommends that children receive two doses of the MMR vaccine for best protection.

Do vaccines cause autism?

Contrary to what some people believe, numerous studies show that there is no link between vaccines (and its ingredients) and autism. The misconception that it does was initiated by a study published in 1998 that claimed that the MMR vaccine might cause autism. However, since then, the research used in the study was found to be false. In addition, the journal that published the study withdrew the paper and the doctor who wrote it lost his medical license.

The misconception that vaccines and autism are somehow linked may be due to the fact that the diagnosis of autism is often made in children between 18 months and 3 years of age—the same age range in which children receive the majority of their vaccinations.

What is herd immunity and how can it help prevent the spread of measles?

Some people, such as those with weakened immune systems, cannot receive the MMR vaccine. But if a large number of the people around them have been vaccinated, it makes it more difficult for those who didn’t receive the vaccine to become infected with measles. This is called herd immunity.

To have herd immunity for measles, about 96% or more of the population needs to receive the MMR vaccination. If too few people receive the measles vaccine, herd immunity disappears—which can then allow measles to spread.

After reading this article, how likely are you to talk with your healthcare provider about getting the MMR vaccine?

Vaccines & Prevention
Get the Facts About Vaccinations
read article

After reading this article, how likely are you to talk with your healthcare provider about getting the MMR vaccine?