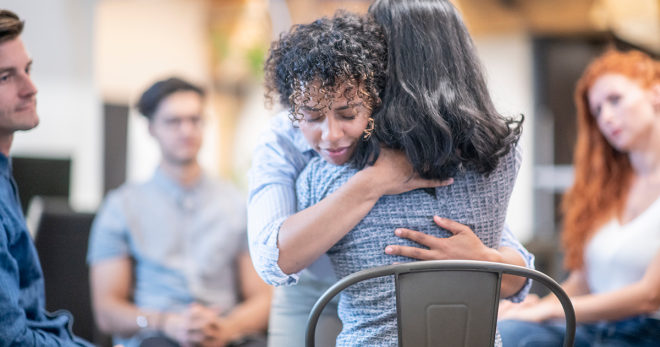 People with addictions (sometimes derogatorily labeled as “addicts”) may sometimes be thought of as having weak characters. But scientific evidence tells us that the roots of addiction are far deeper than simple human willpower. Whether the dependence is on alcohol, prescription medications, or other drugs, the misuse or overuse of any substance can become a chronic, relapsing medical condition. These conditions are associated with compulsive substance-seeking behavior and use, even in the face of, often profound, negative life consequences. Simply speaking, addiction is a disease or medical condition—and those with the disease are often unable to break destructive behaviors without the help of others.

Addictive substances affect the brain’s reward and memory systems by stimulating the release of many chemicals in the brain, one of the most important of which is called dopamine. Overstimulation of dopamine can cause feelings of pleasure and euphoria. Brain imaging shows that long term substance use can create physical changes in the brain in areas that control a person’s memory, behavior and decision-making abilities. It is believed that these changes contribute to a number of complex processes that make it extremely difficult for a person to control compulsive behaviors. It’s as if brain connections get rewired over time with the use of the substance.

You may have heard many different terms to describe substance use disorders: addiction, abuse, and dependence.

What Causes a Person to Abuse Drugs or Alcohol?

The cause of substance use disorders is not clear. The conditions are known to run in families; however, while there are genetic risk factors, there is no one specific gene that has been identified as the cause. There are other known risk factors, including:

When to Get Medical Care

Even though people with these disorders may be involved with different substances, the symptoms of the condition are similar. Common signs of a substance use disorder include:

If you or a loved one may have a substance use problem, there is medical help available. Treatments for addiction, which include medication and psychological therapy, have been very successful for many people. There are also rehabilitation facilities, counseling, and support groups that offer important resources. Keep in mind that every person’s recovery is different, in that what might work for one may not work for another. Work with a professional, such as a doctor or other healthcare provider, who is trained in substance use disorders to find out what might work best for you.

Long-term recovery—that is, abstaining from using a substance and managing potential relapses—is a lifelong commitment but within reach. The first step in the journey to recovery is to seek help.

Daniel R. Karlin, MD, MA is a practicing board-certified psychiatrist, and a Director in the Neuroscience Research Unit at Pfizer.